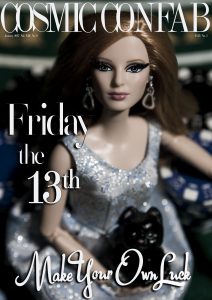 Agreeing with at least part of Hispanic and Greek tradition, Lt. Joe Kenda,  Homicide Hunter,  believes it’s really Tuesday that’s the unluckiest day,  “Tuesday, 1:21 am to be exact.”  That is if you consider homicide to be, ‘unlucky.’

Some things to ponder while hiding under a rock on the 13th:

The idea that Friday the 13th is the unluckiest of unlucky days has no definitive start.  Even the supposed Knights Templar massacre is thought to be a 20th Century invention.  A few of the Knights Templar may have been arrested on Friday, October 13, 1307, but as far as the Templars went, says Helen Nicholson, a medieval history professor at Cardiff University in Wales, the “evidence we’ve got shows them to be extremely boring Roman Catholics.”  It was just Philip IV of France, being Philip IV of France.  Could Philip help it that he had a few of the Templars arrested for heresy and seized their big, juicy, lush lands for himself, er, the crown?    Papal support for the faithful Templar servants?  Pft!   Any whiff of heresy meant mud on the white slippers.

The Knights Templar, however, those loyal, unfortunate and horribly bad judges of character, may not be the tulip bulb of this superstition.

The birth of Friday the 13th as we know it may not have happened until the publication of… Friday the 13th, by stock broker and author Thomas William Lawson in 1907. Nathaniel Lachenmeyer, in 13: The Story of the World’s Most Notorious Superstition, posits that Friday, the 13th wasn’t really a “concept” until the 20th Century, when the unlucky two were united.

Every calendar year has at least one, and at most three Fridays, the 13th.

Thirteen is a Prime number and a Fibonacci number.   Sounding really cool and getting a ‘neato!,’ shout-out from awed, nerdy youngsters, Fibonacci numbers are those numbers, “characterized by the fact that every number after the first two is the sum of the two preceding ones.”  Like the Golden ratio, Fibonacci numbers also occurs in, but are not limited to, nature, science, art and music.

In Brazil, Friday, August 13th is considered the UNLUCKIEST of all Fridays the 13th, as agosto (August) rhymes with desgosto (sorrow).  Luckily, Alfred Hitchcock wasn’t born in Brazil.  On Friday, August 13th, 1899, Sir Alfred Hitchcock was born in Leytonstone, Essex, England, during Mercury Retrograde.  Interestingly, and perhaps fittingly, Sir Alfred made his directorial debut in 1922 with a movie called Number 13; however it was never completed due to financial difficulties.  Being born on the 13th might also account for Sir Alfred’s film genre proclivity and voracious appetites.

Friday the 13th fear is so real in fact that it needed two names:  Depending upon your dipthong preferences, you might want to use the Norse version, friggatriskaidekaphobia – from Frigg, the Norse goddess of wisdom after whom Friday is named, and the Greek words triskaideka, meaning 13, and phobia, meaning fear- or the Greek version, paraskevidekatriaphobiaz -paraskevi meaning Friday, dekatria also meaning 13, and phobia, meaning fear – when calling off work or school.

Happy Friday the 13th – Especially to those lucky enough to be born on one!  You’re in fine company with the likes of the Olsen twins, Fidel Castro (who, incidentally, was ALSO born on the worst day possible in Brazil – Friday, August 13th, 1926, in Mercury Retrograde), and Mr. Pink himself, the great, Mr.Steve Buscemi.