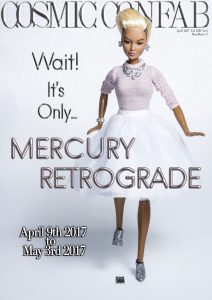 Yes, it’s back, and better than ever!  Mercury Retrograde!

Excitingly, this first Mercury Retrograde of 2017 marks the start of a new nine year cycle:

‘In 2017, Mercury retrogrades four times, beginning a new nine-year cycle. New people and situations and things come to play in our lives that would hold control of our lives for the next nine year period. We would be able to take stock of our standing in the universe and our spiritual perspective now widens. You would be able to grow in all new directions. Mercury would bring about transformations in our lives that we would not have envisioned.’           From Findyourfate.com

This Mercury Retrograde it’s particularly important to be careful with DECISIONS.  Hold out on making any major decisions – especially love and money this go around- until after this three week period, when you’re less likely to think or decide with your heart.  This isn’t necessarily a bad thing, normally, but your decisions now will be compromised, at best, with numerous influences adding to this wonky energy: The moon, a Venus Retrograde, MR happening in earth sign Taurus, and a new nine years cycle are additional rapids in already swirling waters.   At the very least try to remember that you will, most likely, NOT have all the information you need, just due to Mercury Retrograde itself.  And even then, give it a couple of days on either side as residual effects are experienced for a few days leading up to and after the ‘official’ dates.

As a reminder, Mercury rules over communication, commerce, and logistics: speaking, negotiating, buying and selling, listening, formal contracts, documents, travel, mail, shipping, etc.  All of these areas of life are affected in some way and to some extent when Mercury is in retrograde (backwards, reversed) three times a year.  Prepare by giving yourself extra time, backing up all data you don’t want to say valediction to, and generally keeping it together when things go wrong.   Especially this Mercury Retrograde, decision-making is compromised, so try not to sign any contracts, engage in important decision-making, or launch something new, like a business or even relationship. Delays and challenges are highly probable when Mercury is in retrograde, so have extra patience and know that this too shall (eventually) pass.

Though you may want to, and there might be heat in the moment, PLEASE DO NOT BLURT OUT THE FIRST THING THAT COMES TO MIND, it’s going to be impaired. Expect, at best, oafish clown.  At worst, Ronny Rumble.

DO NOT make ANY rash or major decisions about relationships or money!!  And REALLY don’t make any major purchases or start/modify/end a relationship. Think everything through and then wait some more! Watch what you say to people and how you react to them because we’re ALL going through this, not just Planet You.

So FYI, if you’re experiencing more dithering capriciousness, mystification, and/or apathy of your own, you should also expect to enjoy it from other people and situations too.  Surprise, surprise: The buzz word for this Mercury Retrograde is PATIENCE.