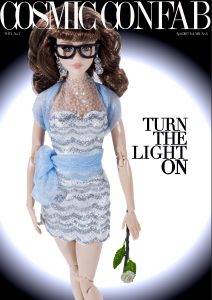 So, the one intern here at Cosmic Confab happened to mention New Year’s Resolutions, out loud.  How and why they thought about and then did this, no one knew – and almost no one cared.  We here at CC have always believed that the ‘NYR Amnesia’ set in around March 1st , slowly erasing any memory of self-improvement until next year’s re-up.  In the spirit of adventure, however, our shamed-induced and hastily called New Year’s Resolution Round-Up Round-Table produced a common NYR theme:  More positive, less negative.  This week’s cover is a reminder of that continued commitment, and effort, to maintain this foundational tenet, however laborious and redundant, it may seem.   The more light in the world means more light in the world.

A white rose symbolizes light as well as purity, innocence, sympathy, and spirituality.

If you don’t know how to turn the light on for yourself, then FIND a way.  Find some way that’s going to resonate with you and get you out of, or distract you from the negative.  Turning on the light really means that you’re committed to making the best choice for yourself and YOUR future.

The negative response, or choice, might be like a mouth watering, good time, ice cream cone to you, but it’s a habitually rote response that has given you nothing but anger and victim-hood.  You CAN say no to the negative attitude.  Even if you can’t be or see any positive, try to at least NOT be negative.  Get your mind off of it.  Then go from there.

It IS your choice.  It might be REALLY, REALLY, REALLY, REALLY hard to choose not to blow up or give in to anger, or similar negative responses, but you CAN do it.  And once you do it again, and again, and then again, you’re on your merry way to making it a habit.  When this happens, and you come from a positive, can-do attitude, most of the time, things will change for the better, in ALL areas.  TRY to make it a habit to choose what’s REALLY best for you.

Said New-Year’s-Resolution-shaming intern, sent almost immediately by the Universe to test us by breaking Cosmic Confab’s best, and only, industrial ice maker that the last plastic CEO had installed because, and ONLY because, he liked to clink and cool his Maker’s Mark.  Now, we COULD freak out and gnash our teeth because that means… some drinks and things won’t be cold-er.  We could do that, concentrate on what’s WRONG, and prolong that pain. OR we COULD accept it, deal with it and dream of our fixed and/or new industrial ice maker spewing forth ice quicker than Motel 6’s best, as we move on.  THAT’S TURNING ON THE LIGHT.