To Me, From Me 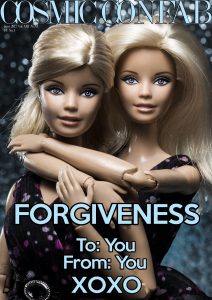 Anger/hatred and all the other wonderful emotions that keep you in the citadel of childhood responses/emotion/power  – which isn’t necessarily bad IF you’re a child – prevent you from (at least) one thing:  Moving on.  You’re trapped by your anger in a Groundhog Day-like loop – reliving the same unpleasant things in the same unpleasant way – that only YOU can break.  Phil broke his with acts of kindness that changed HIM over time, but another way to do this is through forgiveness.  (Amnesia, though appealing for a total ‘reboot’ concept, is impractical, and just a titch dangerous.)

Make no mistake, and if you have to start from here, then so be it, but, make no mistake that forgiveness is, first and foremost, for YOURSELF.  Let us say it again:  Forgiveness is for you.  Instead of giving yourself constant flaming bags of shit to put out, in a messy, haphazard, and UNhelpful manner, give yourself some healing for once, something good.   Give yourself the gift of forgiveness.  Forgiveness: hugs and kisses for and from you.

We’ve found for us, here at CC, that Dr. Fred Luskin’s fantastic book, Forgive For Good, has one of the best and most succinct explanations of what forgiveness is:

There is no timetable for forgiveness.  No single pace is right for all of us.”

Forgiveness is a thriving skill, part of the healthy love you have, or need to have, for yourself.  And just like love in a relationship with another person, it needs to come from what IS in order for it to work –not what you wish for.  Reality is another one of the gifts of love you give yourself, no matter how painful it may be to feel it.  Your power is in the now, in reality.  If your fantasies could pay you, no one would suffer.

Forgiveness is seeing what the other person IS, not how you wanted them to be or act.  SEE REALITY AND ACCEPT, THEN WORK WITH IT.  Accept that you can’t change the past, or that it SHOULDN’T have happened – It’s reality, it did.

Everyone is the sum of their parts – good and bad.  Forgiving someone doesn’t mean that you forgive and forget and become best buds.  Forgiveness may be one of the most beneficial things you can do for yourself (and your loved ones).  You’re giving yourself a gift of healing.  You’re recognizing the ‘wrong’ that someone has done based upon the sum of their parts, their upbringing, their beliefs and their reality as they see it – all unique things you possess as well.   Recognize this, then ‘process’ (choose how you’re going to think) it based upon where and who you are now, and who you want to be going forward, from here out.

The problem with forgiveness comes when you expect – ah, expectations – the other person, or relationship, to miraculously change because of it.  The only person you can change with your forgiveness is you – After that some decisions have to be made in order for you to ‘deal’ with the new reality – to an ‘anger-less’ you.  The relationship or situation is different now, and should be treated as such.  First and foremost, respect yourself.

In the immortal words of Burgess Meredith in ‘Grumpy Old Men,’ “You can wish in one hand and shit in the other and see which is filled first.”  It’s the same with forgiveness and holding on to your anger.   Anger is wishing the other person – or worse, the past – would change.  Two things you have NO CONTROL over.

Forgiveness is an ONGOING process that you must PRACTICE to make part of your life and routine, if you really want to reap the benefits of this magical elixir of life.

Forgive, let go and MOVE ON.

Everyone says you should do it, but HOW is another matter.  And the number of ‘how’s’ out there are as many and unique as there are people.  Next time, some suggestions on HOW to forgive.

Find and pick a way to forgive that sounds and feels good to YOU, otherwise, it’s not going ‘to take.’