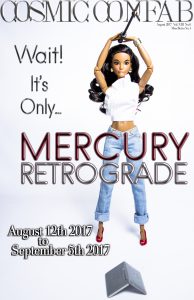 The theme for this Mercury Retrograde?  EMOTIONS, and lots of them.   And not the ‘good’ ones either.  Fear, insecurity, mistrust, suspicion, lying, deception, betrayal, fraud and adultery are just some of the negative emotions that may arise, with a vengeance, during this period, particularly in relationships and financial areas.   You may experience major and important events during this period that could change your thinking on relationships and your sense of self.  Take great care what you do and say during this period – powder kegs are rarely good for anything except obliteration.

Because Mercury Retrograde is a (generally great) time to REVISIT old, unprocessed, or uncompleted things, you may very well experience bouts of negative thinking or emotions, centering on and pulling you back to times, people, and places where these emotions were and/or are strong, even if you feel you’ve healed it and moved on.  (Which, I’m sad to say, you haven’t.)  You may find yourself revisiting old wounds, and getting angry, hurt, and indignant all over again.  BE CAREFUL.  Don’t give in to the negative emotions and feelings, as this illusionary, self validating ‘heroin’ can snowball, become a repetitive pattern, and way of being.  Think of this as Mercury’s little lesson in self control and patience for you to practice.  I know, what isn’t…

This cloudy, biased, and confused thinking only increases the chance of miscommunication and relationship problems. Beware of lies, deceit, duplicity, gossip and scandal.  This is a bad time for making any important decisions and plans.  MR is always, generally, a bad time for making (new) decisions and/or plans, but because the theme to THIS MR is fear, confusion, mistrust, etc., it makes for a quadruple whammy.  Chances are ANY decisions made now will be severely compromised, need major revisions, and be based upon FEARFUL, deceptive, and suspicious thinking. Think about your reactions and if it will serve you to fly off the handle. What are the consequences of that?

Try to keep calm and go in with your ‘Sword of Love’ drawn, ready to chop down fearful rhetoric and action, exposing the truth.  Keep yourself under control and emotions in check, as even a little slip could devolve into a landslide.  It’s hard enough to keep yourself calm, but when you have retrograde pressure, everyone is going to feel it.  Patience with yourself and others will stave off or avert untold misunderstandings and sufferings down the road.  And watch spending.  Resist the impulse to buy.