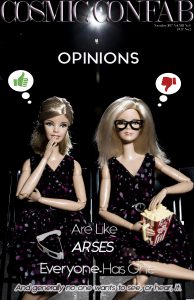 Opinions are like arses.  Everyone has one.  (And generally no one wants to see, or hear, it.)

‘Most people are other people.  Their thoughts are someone else’s opinions, their lives a mimicry, their passions a quotation.’   –  Oscar Wilde

Though we are ALL opinion – from history, from our families of origin, from our own likes and dislikes, you name it – opinion is SUBJECTIVE.  If we gave into everyone elses opinion all the time we’d be even more of a pinball than we

think we already are.

Do you like me?  Yes.  No. Maybe.  There are a bazillion reasons why someone wouldn’t and doesn’t like you and YOU could, and probably do, have NOTHING to do with it.  Most of the time you don’t.

Opinions, by definition are judgments.

Lots of people have opinions about blondes.  About the name Allison.  ABOUT EVERYTHING.  Just because someone has an opinion, even including, and especially including about you, doesn’t make it RIGHT.  It doesn’t make it believable, it doesn’t make it true.  Someone thinks the sky is pink.  Guess what?  That’s not true for you and everyone else on this planet, but who knows WHY they think it’s pink?  Perhaps an eye ‘mutation,’ YOU DON’T KNOW.   For THEM, the sky IS pink at 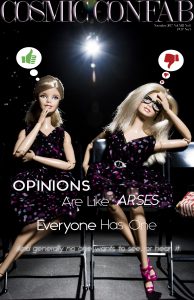 That’s the point about an opinion.  And EVERYONE has one about everything.   There is NO WAY it can be 100% informed.  It’s based entirely on subjective conjecture and fractured partial truths.  Unless you’re the/a Supreme Being it’s all opinion, until PROVEN fact.  And even then, we don’t have the WHOLE story.

It’s all about perspective – YOUR perspective, no one else’s.  Just because you’re offended, doesn’t mean you’re right.  It doesn’t make you wrong either, barring something universally atrocious, and even then, it’s ALL ABOUT PERSPECTIVE.  And perspective is the bedrock for opinion.

No perspective, although most will have you believe differently, is inherently better or worse than another.   Therefore, no opinion is

better or worse than another – Just someone’s insistence on it.

Being offended is YOUR OPINION and YOUR CHOICE.  It keeps you stuck, and defined by someone else.  Concentrate on YOUR agenda, and YOUR definition of you.  That’s where everything starts and ends – with YOU and your decisions.

Never allow yourself to be defined by someone else’s (utterly uninformed) opinion about you.