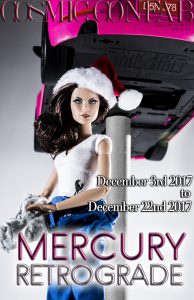 Those holiday cards you had professionally addressed in calligraphy?  Better make sure you have the correct address and postage, and even then cross your fingers and kiss them goodbye!

Though at times it feels like we never got out of the last Merc Retro, this one will be a doozey – especially during the holidays.  Travel will be ESPECIALLY impacted – and all the trappings that go with that.  Schedules, electronic hiccups, out of gas – you name it, and you’re going to find it.

This MR is very intense as MR normally sees us revisit old ideas, thought patterns, etc and a chance to redress those, but this MR will underscore that divine purpose, probably twice.  No, make that thrice.

This Merc Retro in Sagittarius is about expansion and contraction.  That’s the name of the game, and this MR is going to show us this very important universal growth pattern.

As the 9th sign in the zodiac, Sagittarius rules over the 9th House of Expansion.  Jupiter is the planet of faith, positivism and optimism. It rules Sagittarius.   Jupiter represents the principle of expansion, versus contraction (as represented by Saturn) and the aspirations of the higher self.  Mercury stations retrograde right next to Saturn to make this a somber retrograde phase with serious thinking and discussions.  Saturn’s critical thinking which is best applied to serious mental work may have you dwell on the negatives, but keeping your mind busy with positive pursuits will work to combat this and any sabotage that may result from such poor thinking.

This retrograde will show us how releasing and shedding all the mental blocks of 2017 will prepare us for the expansion of our understanding – and perspective –  of recent events or information, both personally and globally. We’re finding new ways and angles to view ourselves and our world.  And with this, new understanding and growth.