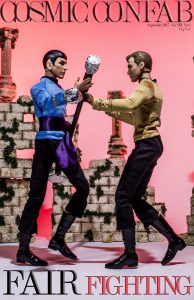 WHY would you care about, or even try, FAIR FIGHTING especially if the other doesn’t?  Well, because you’ve decided that YOU are the one to change, no one else.  You’re living YOUR WAY – your TAO – and part of that is to also take care of yourself.  The fair fighting rules, guidelines, or whatever you want to call them, help YOU with that.  It helps YOU to understand the situation, and even yourself a little better.  You control YOU.  These are just some of the tools you can use to teach yourself to do that a little better.

You’ve decided it’s been enough of the fly by the seat of your pants, react to everything everyone does mentality and behaviour you’ve slowly, but surely, have adopted as your go to response – to everything.  You’re controlling your own ‘burn’ now.  You decide that communication, understanding, and truth is the goal and more important to a discussion or ‘fight,’ rather than making sure the other person knows your right.

Try using these rules ON YOURSELF, and see what happens.  Even one or two.  Especially the ones about no name calling, brown bagging, and ‘always’ statements.  Just those alone would change your life.   But it takes work.  Work in RE-training yourself to be if not ‘nice’ to  yourself, then maybe just ‘professional,’ in how you deal with things in general and approaching problems in particular.

These rules or guidelines are designed to help you switch from just fighting, or spinning your wheels, to solving problems and moving on to the good, or at least better, things.  As with most things, it takes time to learn and even longer to incorporate new behaviour, so have patience and keep trying.  It IS worth it.  Solving your problems in a constructive way adds to your peace and calm, not fighting your way to more misunderstandings and frustrations.

You’re ‘fighting’ to hopefully solve a problem that one or both of you have.  To have a mutually respectful, beneficial, supportive, fun, you name it relationship.  Not to fight for the sake of fighting.  That’s called debate, and they have clubs for that.